VGP – The European Parliament’s Committee on International Trade said Tuesday that it backed the free trade and investment deals between the European Union and Viet Nam, a positive step toward official ratification by the Union.

“The committee gave its consent to the free trade agreement by 29 votes, six votes against and five abstentions and recommends that EP Plenary should do the same,” according to the Committee’s press release.
Viet Nam and the European Union signed the trade and investment agreements in Ha Noi on June 30, making Viet Nam the second ASEAN nation to sign this kind of agreements with the European Union.

The agreement will remove virtually all tariffs between the two parties in ten years. It will protect emblematic European products, and allow Europe to access the Vietnamese public procurement market.

Regarding customs duties, 65% of EU exports to Viet Nam will be immediately duty free, with the rest – including motorcycles, cars, pharmaceuticals, chemicals, wines, chicken and pork – gradually liberalised over ten years.

Meanwhile, 71% of Vietnamese exports to the EU will be duty free on day one, with the rest catching up in seven years.

On geographical indications, 169 emblematic EU products such as Parmigiano Reggiano cheese, Champagne, or Rioja wine, will enjoy protection in Viet Nam, as will 39 Vietnamese products in the EU;

For services, EU companies will have improved access to business, environmental, postal and courier, banking, insurance and maritime transport services in Viet Nam.

On public procurement, EU firms will be able to bid for contracts with Vietnamese ministries, state-owned enterprises, as well as with Ha Noi and Ho Chi Minh City. 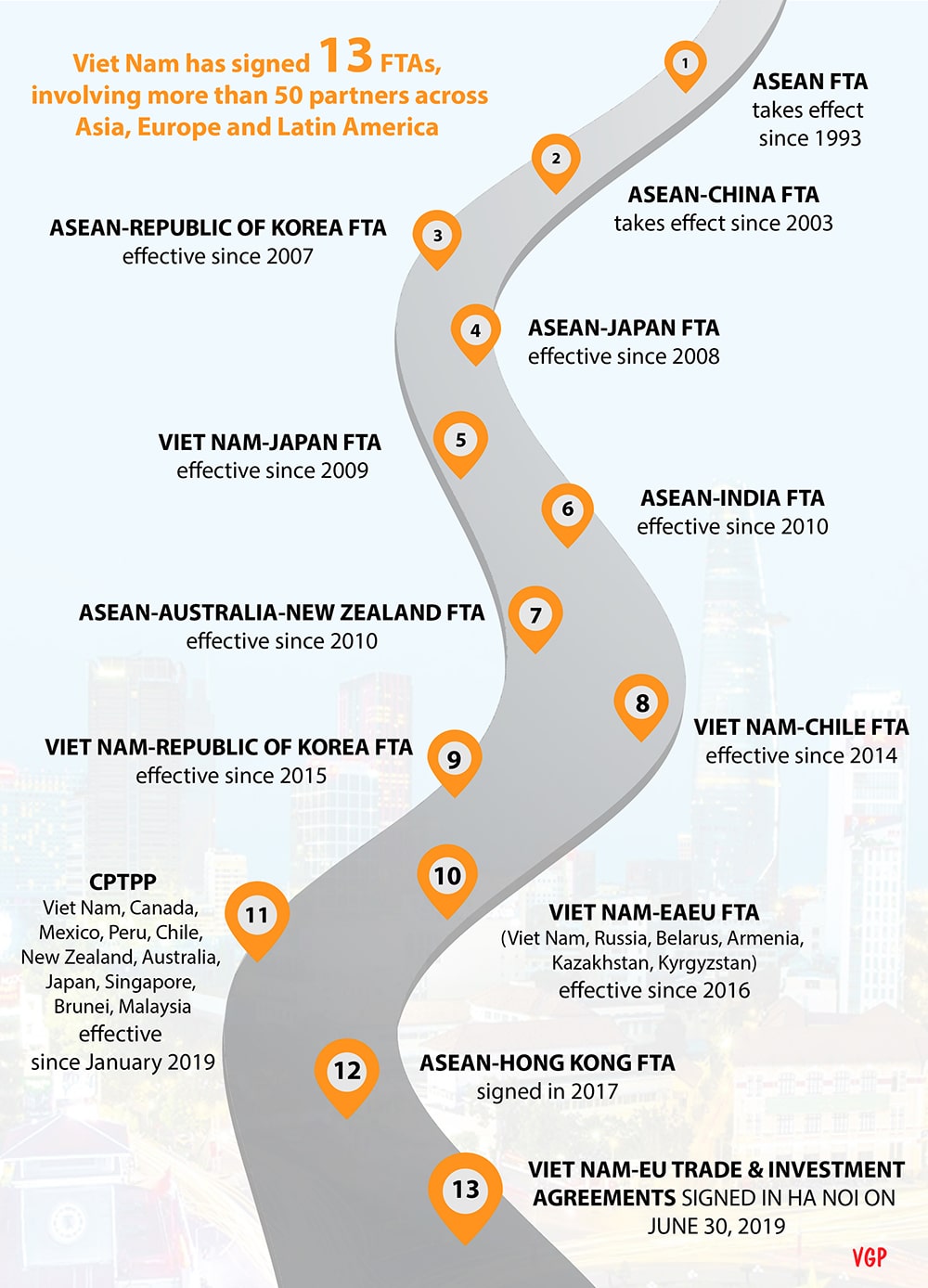 Viet Nam is the EU’s second largest trading partner in the Association of Southeast Asian Nations (ASEAN) after Singapore, with trade in goods worth €47.6 billion a year and €3.6 billion when it comes to services.
So far the Souhteast Asian country has signed 13 free trade agreements with external partners, of which the Viet Nam-EU free trade agreement (EVFTA) and the comprehensive and progressive agreement for trans-pacific partnership (CPTPP) are considered the “new-generation” deals with higher and broader commitments.

Beyond economic benefits, the EVFTA and CPTPP are also expected to stimulate the Government’s on-going institutional reform agenda in the context of extensive international integration in which economic integration is the core